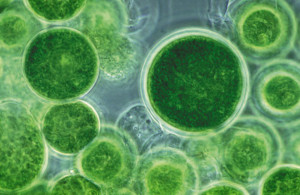 Scientists have unearthed a new kind of crude oil that could displace diesel and gas as the main source that powers motor vehicles a few years from now. The new bio-crude oil is called algal oil and is produced from concentrated algae using a hydro-thermal liquefaction technology.

Algal consists of water and between 10 percent to 20 percent of algae. The compound takes less than an hour to produce and is done in a pressure cooker with temperatures of above 600 degrees Fahrenheit. While it is in the pressure cooker, the crude oil is separated by gravity. The result is bio-crude oil which can be further refined into gasoline.

Some companies are already pursuing algal oil as alternative to gas and diesel. These companies include Cellana, Sapphire Energy and Synthetic Genomics. However, in order for Algal oil to be produced on a commercial level, scientists will have to carry out further research to enhance it.

Previous Post: Native European Grasses Possible Candidate For Biofuel
Next Post: Hong Kong Is Getting Into The Biofuel Arena